The timing of a proposal by 60 MPs to bring in a jail sentence of up to a year for defamation against the president could not have been more opportune. The move from deputies spanning the Social Democrats, Communists, ANO and Dawn came just two days before the 27th anniversary of the Velvet Revolution.

And yes, this year’s 17 November events were primarily a time of demonstration for precisely those people opposed to Miloš Zeman.

Zeman’s supporters are rubbing their hands with glee over the prospect of a law which would finally rein in those who have dared to point out the president’s numerous mistakes, court-affirmed lies, inappropriate words and untoward behaviour.

Fine, but let the proposed law apply not just to the current head of state, but also to his predecessors. For many of Zeman’s proponents have for years been doing their level best to besmirch and defame our first post-revolution president Václav Havel with the worst vulgarities.

Incidentally, Zeman too, will one day have to bid adieu to the Castle. At which point his supporters will no doubt relish pointing out the flaws and failures of his successor, especially if he or she is a political opposite. Which would then undoubtedly lead to great surprise among the Zemanites that such a ridiculous law suddenly applies to them as well. 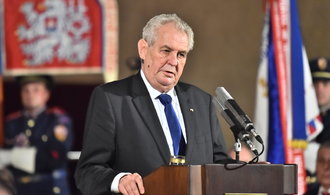