GE drone engines investment getting off the ground

20. června 2016 • 16:47
The contours of one of the biggest foreign investments in the Czech Republic in a decade – the construction of a General Electric Aviation aircraft engine factory – are coming into sharper focus. Sources close to the government have told E15 that the process has moved to the point where a suitable location near Prague is being selected.

Actual engine production is expected to begin by 2020. Things are reportedly becoming clearer for the Czech Technical University [ČVUT] as well. It is the only university in the country that has been approached by the American investor in relation to the plant.

The plan is not only to manufacture turboprop engines for small and medium-sized aircraft and drones, but also to design, develop and test engines. For that reason the labs and manufacturing halls need to be close to an airport. That key factor narrows down the choice to either Kbely on the outskirts of Prague, with its Czech Airforce 24th Air Transportation Base, or Klecany, just outside Prague but next door to the Aero Vodochody airport.

GE Aviation will need to strike a deal with the defence ministry to use the Kbely base or with investment group Penta, the owner of Aero Vodochody. Since the state is to become a participant in the investment project it is thought likely that Kbely will come up trumps. “The development and production facility would incorporate the Aerospace Research and Test Establishment [VZLÚ] based in Kbely,” a government official said.

Prime Minister Bohuslav Sobotka discussed the construction of the factory during his visit to the US in March. A short time previously he had signed a memorandum of understanding with US-based General Electric Aviation. According to Sobotka, the plant should produce some 500 engines a year.

The research centre would provide jobs for up to 900 people, mostly engineers and technicians. And that is where ČVUT comes in. “In addition to drone engines, where a contract for 3,500 units has already been pre-negotiated, the US side wants us to train one hundred engineers a year for them during the early years of the cooperation,” said ČVUT rector Petr Konvalinka. Konvalinka also pointed out the fact that GE Aviation would no longer mainly design engines in the US, but would transfer such activities to the Czech Republic. 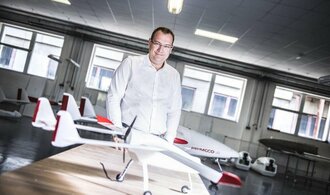