The champ: A lesson in can Do

17. března 2014 • 14:01
Sdílet na Facebook Sdílet na Twitter Sdílet na Facebook Messenger Sdílet na LinkedIn
These days, austerity and frugality aren’t only for the hardest hit. Even Jiří Hlavatý, the owner and manager of building and agricultural textiles firm Juta, and recent winner of EY’s Czech Entrepreneur of the Year 2013 award, lacks his own secretary. instead telephone calls are dealt with by the company’s receptionist.

Look, isn’t it wonderful? Enthuses the CEO and owner of Juta, Jiří Hlavatý, as he glances at a huge machine. “That’s what I call a machine. We built it for CZK 150m with our own engineers. We use it to make eight metre foil. We were the first in the world to make this. Yet now, after a few years, the Americans have learned our tricks,” he adds.

But at present, the machine is silent. Several staff are replacing parts in the complex apparatus. “What are you up to?” Hlavatý asks them. Their brief response leads to an approving nod. “You see, only highly qualified and educated people can carry out this work. So long as our government wants an educated society, it needs to support industry. The majority of our machines are operated by computers.”

A heavy current has morphed into electricity, so to speak. This business is not for fools,” Hlavatý adds. Once again, he looks out across the production plant, filled with only technicians. “Well, look at this,” he again beckons, this time pointing to the switched-on lights atop the ceiling. “Look at how they are wasting electricity. Right away, I am going to call the supervisor to have those turned off,” he snaps. In Juta, economising comes with the territory. Even Hlavatý lacks his own secretary. instead telephone calls are dealt with by the company’s receptionist.

The competition continues to get tougher, and profit margins are ever narrower. For that reason too, Juta is considering building rainwater collection tanks.

Presently, Juta employs more than 2,000 people. The company makes textiles for use in building and agriculture. Its products are shipped across the world, with about 80 percent of output targeted for export.

Last year, turnover amounted to almost CZK 6bn; this year, the plan is to increase that to CZK 6.2bn. “I’m not too happy with such numbers. I think we should increase efforts to improve production efficiency, lowering costs and so on rather than increasing production and sales. That is a simpler path,” says Hlavatý. To the observation that the CEO could take a more hands-on approach in the running of the company, Hlavatý responds: “You’re right.”

As CEO, Hlavatý “survived” the privatisation of the company at the start of the 1990s. At that moment, the former state firm was taken over by investment funds from Živnostenská Banka, Česká Spořitelna and Komerční Banka. This lasted for seven years. But then in 1998, Hlavatý and several other members of the company’s management set up Jutaplast, which subsequently bought a 78 percent controlling share in Juta worth CZK 600m. In 1999, Jutaplast and Juta merged. Between 2001 and 2002, Hlavatý bought out the remaining larger shareholders, assuming control of about 94 percent of Juta. This year sole ownership was then consolidated; by 2005, the CEO also became the 100-percent shareholder.

Last week, Jiří Hlavatý was awarded the title of EY’s Czech Entrepreneur of the Year 2013. Euro magazine (sister publication to E15) served as a media partner to these awards. And yet Hlavatý almost failed to make the winners’ list at all. Last year, the businessman was called upon by ANO leader Andrej Babiš to represent the party as a parliamentary candidate for the Hradec Králově region in the October elections. He declined. Purportedly, this was because the Juta owner did not have an alternative management structure in place that would operate in his absence. “Juta is a huge responsibility. If I were to serve as an MP, I would have to resign from the company, and that would be an excessive risk,” Hlavatý explained last November.

Even if the Juta boss claims that all of the company’s production programmes are of equal importance, there is nonetheless one about which he enjoys bragging – the production of artificial turf. This product may only represent a paltry four percent of overall revenue, but Hlavatý describes its production as representing the company at its most modern. The end product is shipped to dozens of countries, from neighbouring Germany all the way to Saudi Arabia. Indeed it is in the production of this artificial grass that we find a potent illustration of the Juta owner’s tenacity and stubbornness.

In an interview published by Euro last January, Hlavatý complained about how difficult it was to make inroads with artificial turf in the Czech Republic. He was primarily pointing the finger of blame at the Czech Football Association’s (FAČR) Stadium and Playing Surface Commission (KSHP). Only a few months after the interview was published, photographs appeared in newspapers showing Hlavatý alongside the head of FAČR Miroslav Pelta opening a new stadium covered in Juta’s artificial turf. And the factory at which the material was manufactured was built by the Juta boss within an industrial zone at Králův Dvůr. 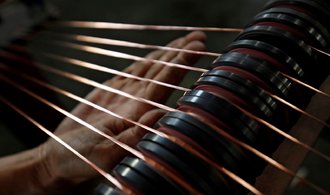